Stomata are small openings that mainly occur on the underside of leaves. They are surrounded by specialised cells and they regulate the gas exchange between the plant and it’s environment, the plant is 'breathing' through them, as it were. Stomata are very recognizable by the two kidney- or bean-shaped guard cells that regulate the size of the opening. The guard cells are specialised epidermal cells which contain vacuoles that change their shape when water is absorbed due to a process called turgor, causing the stomata to open. The stomata are opened by stimuli like high humidity and bright light. Depending on the plant family, guard cells are often surrounded by so-called subsidiary cells.

As for the morphology of stomata, some different shapes can be distinguished:

● tetracytic: with both lateral and polar subsidiary cells

Stomata are fascinating objects to study, in each plant they look a bit different or are positioned differently. To observe stomata we need to peel off the epidermis from the underside of a leaf. If you tear a leaf apart, often a small piece of the epidermis will come off. Especially with thicker leaves this works quite well. Easy to begin with are the leaves of Hosta, Prunus laurocerasus (Cherry laurel) and Tradescantia.

Hostas are popular garden plants. In garden parks you will see them a lot. In the garden park where I have a house, they are also very popular with snails. There are almost no undamaged specimens to be found.

The hosta is a monocotyledonous plant native to East Asia. The epidermal cells are not very typical for a monocot plant and there are no subsidiary cells to be seen. The stomata morphology can therefore be labeled as anomocytic. 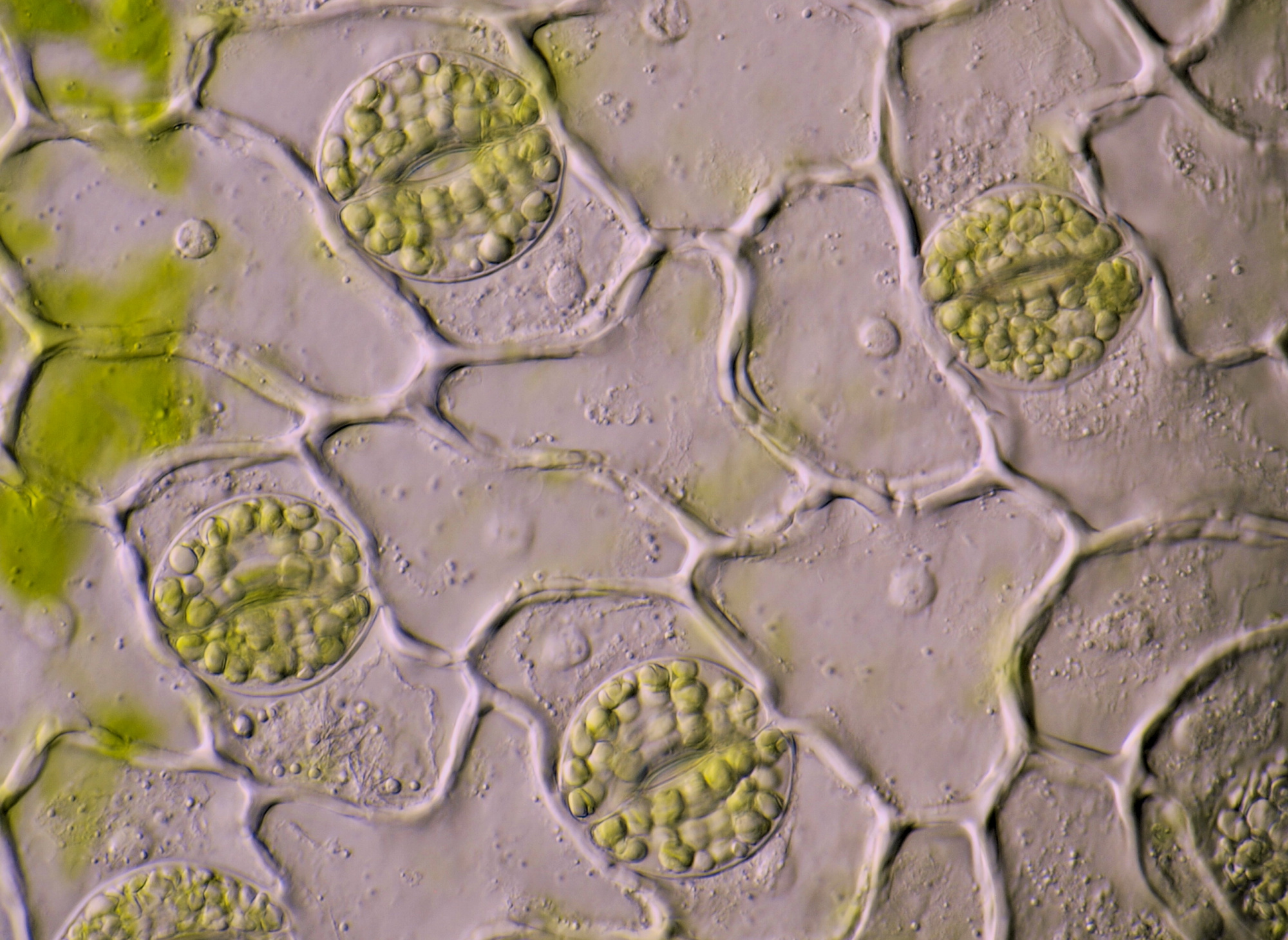 If you look at an intact leaf of Tradescantia zebrina through the microscope, a special picture emerges. The leaves of this plant are quite thick so it’s only possible to use an objective with a long working distance, like a lower magnification objective. Also, a bright light source is needed to shine through the leaf. 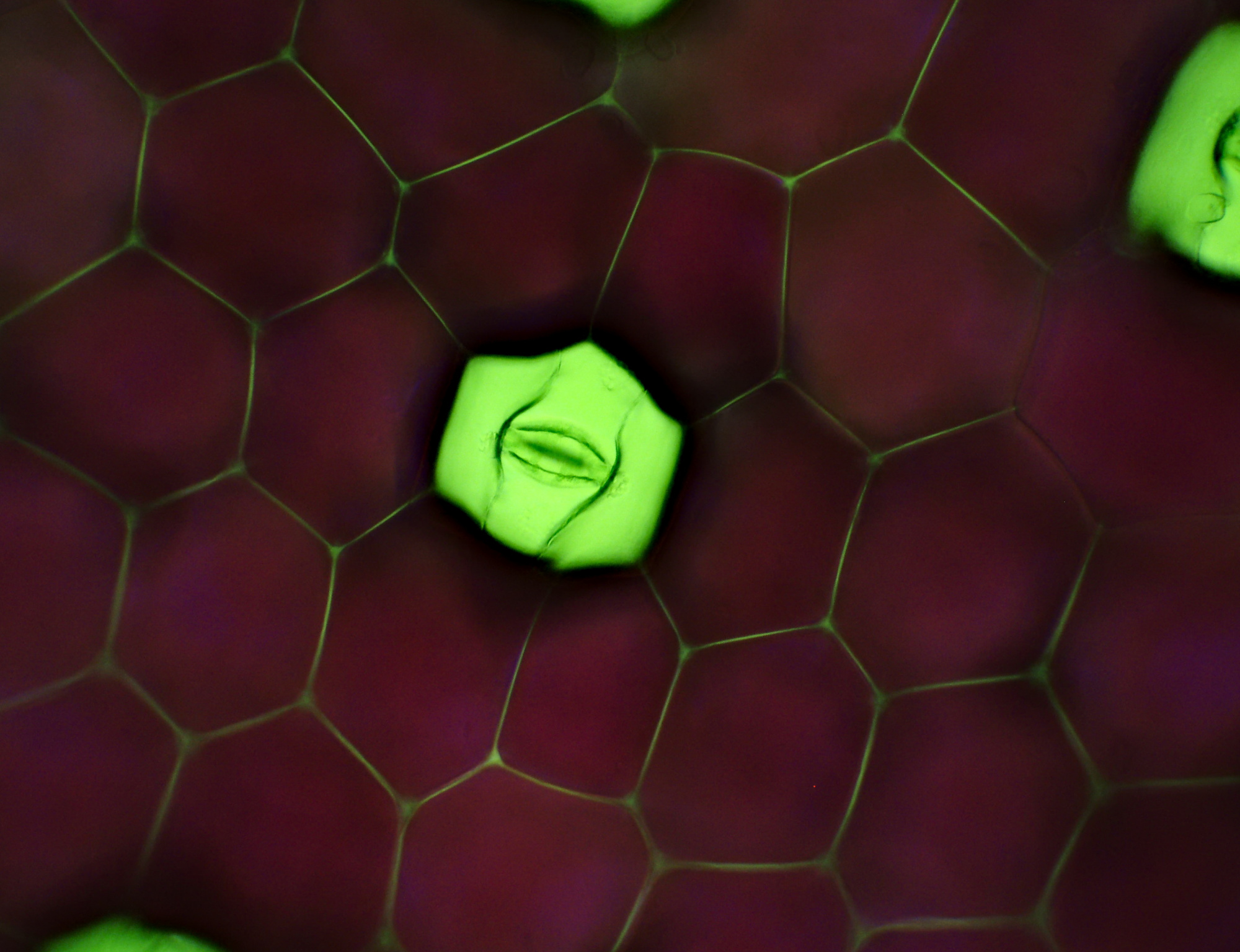 A whole leaf of Tradescantia zebrina that was shine through with a bright lightsource. Objective: Zeiss 25/0.45.

A plant worth investigating is Yucca filamentosa (Palm lily). The stomata of the Palm Lily look quite special. This plant has thick leaves and the epidermis is easy to peel off. 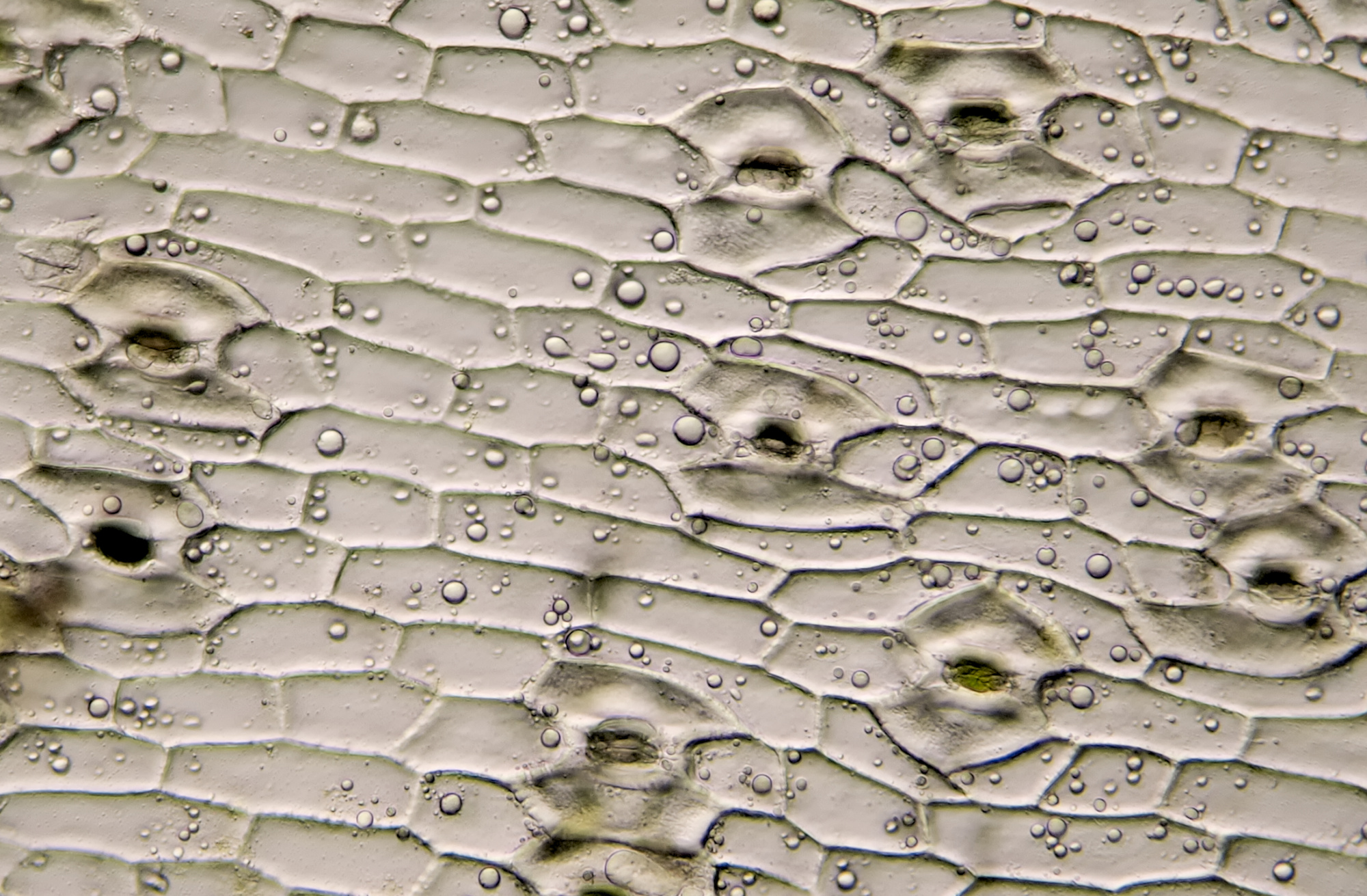 Stomata in the epidermis of Yucca filamentosa. Also visible are many oil droplets. The material for making the image came from a Palm Lily that was located at a garden in Kessel (Limburg) and the microscope image was also made on that location. Objective: Neofluar 25/0.60.

Maize belongs to the grass family (Gramineae) and the epidermis of these plants is characterized by elongated cells with undulating cell walls. The stomata are oriented parallel and have 2 subsidiary cells. 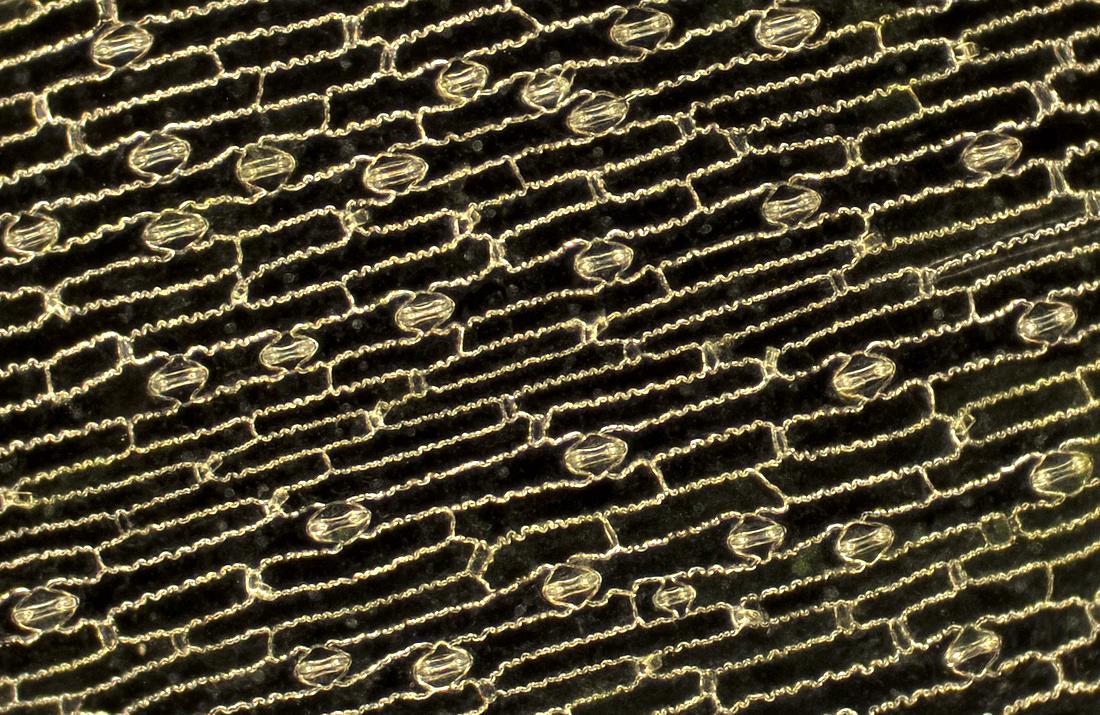 The parallel arrangement of stomata that is often typical of monocotyledonous plants such as in this case, maize. Photographed in darkfield illumination with Zeiss-Winkel 10/0.25 objective. The following is a selection of stomata in other plants. 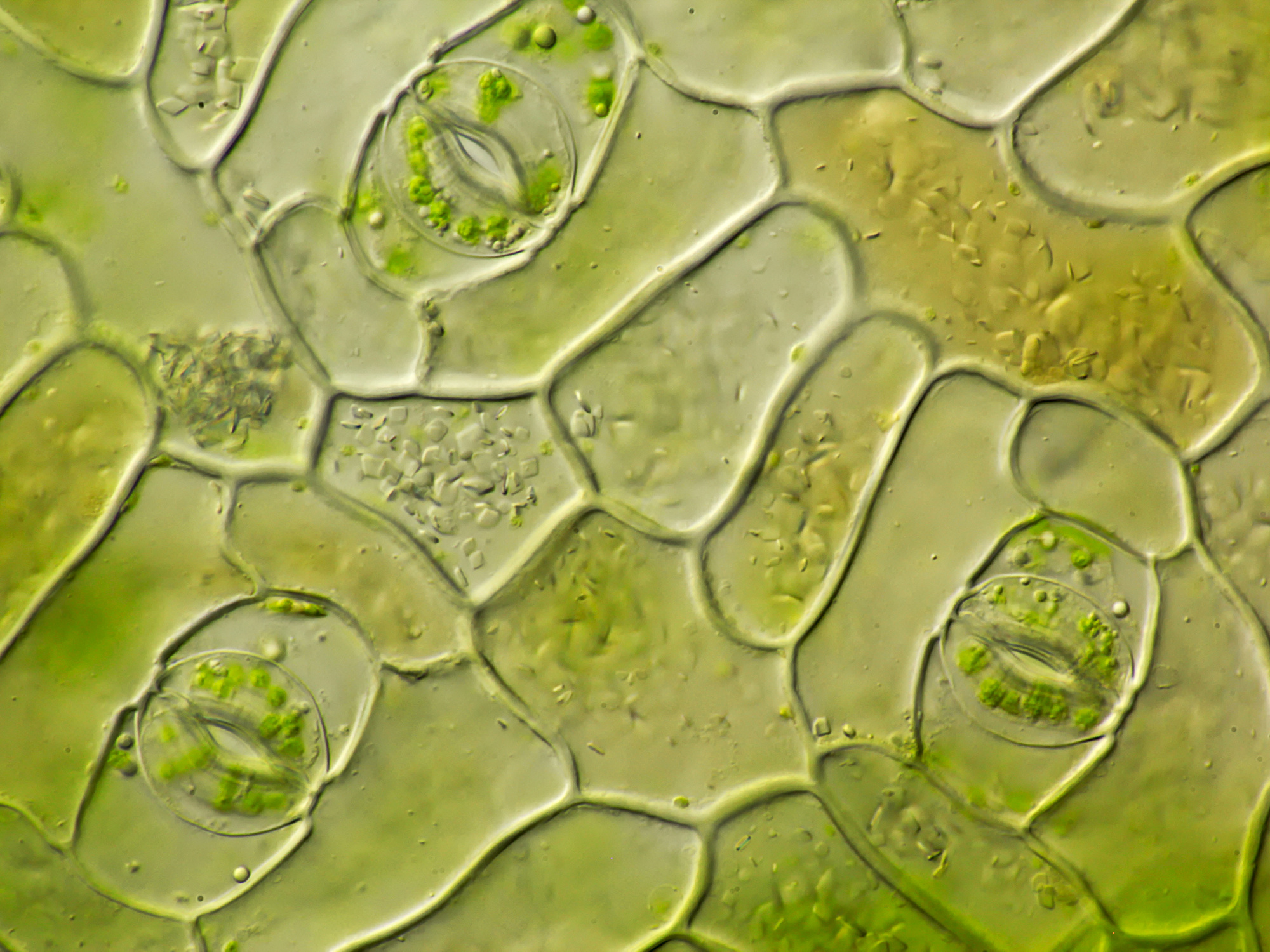 Epidermis from a leaf of Canna. In addition to the three stomata, there are many calcium oxalate crystals visible in the cells. Objective: Carl Zeiss Apo 40/1.0. 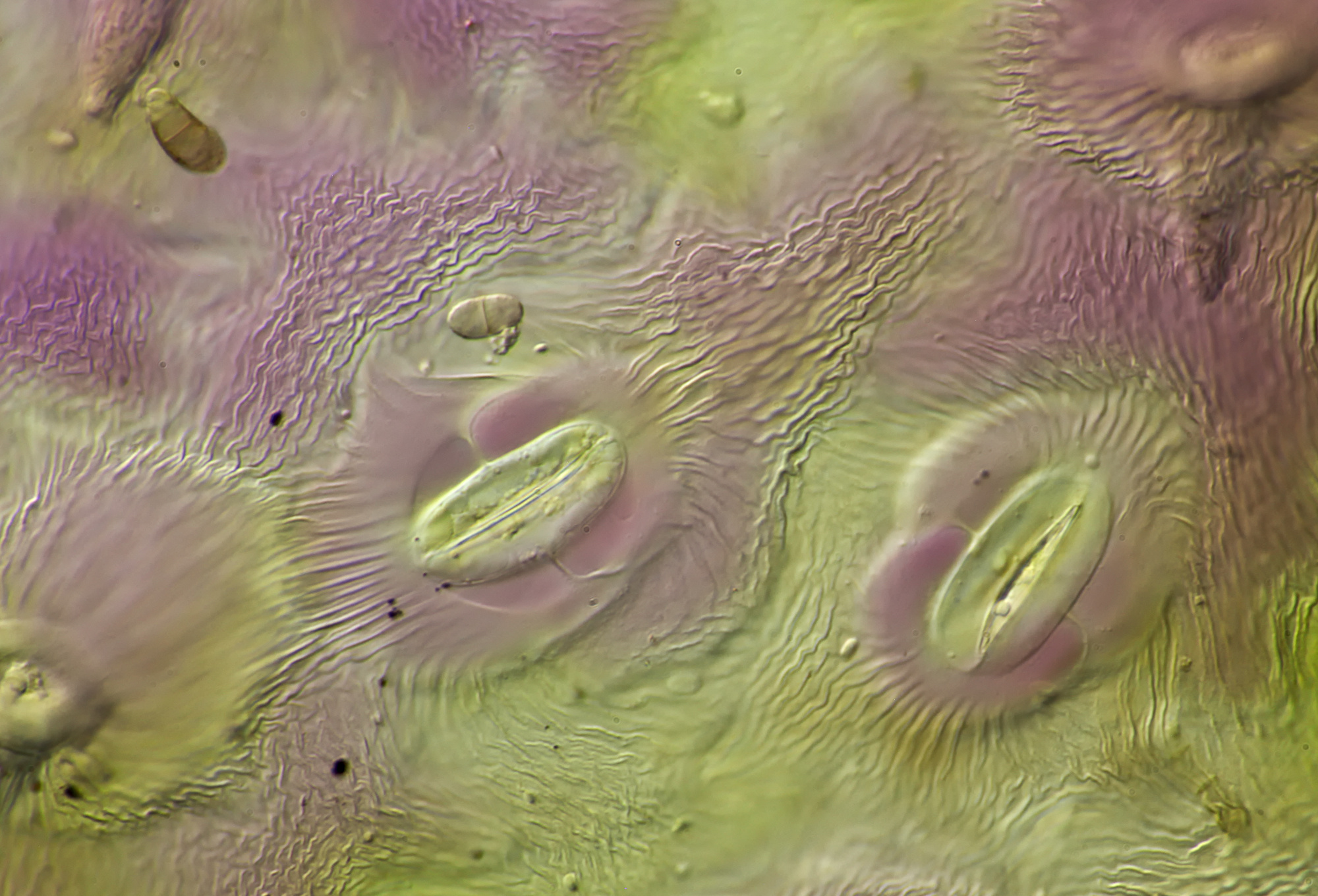 Like the surface of another planet: the epidermis of Acanthus. The patterns are formed by cuticle, a waxy layer that acts as a water repellent. Objective: Carl Zeiss Apo 40/1.0. 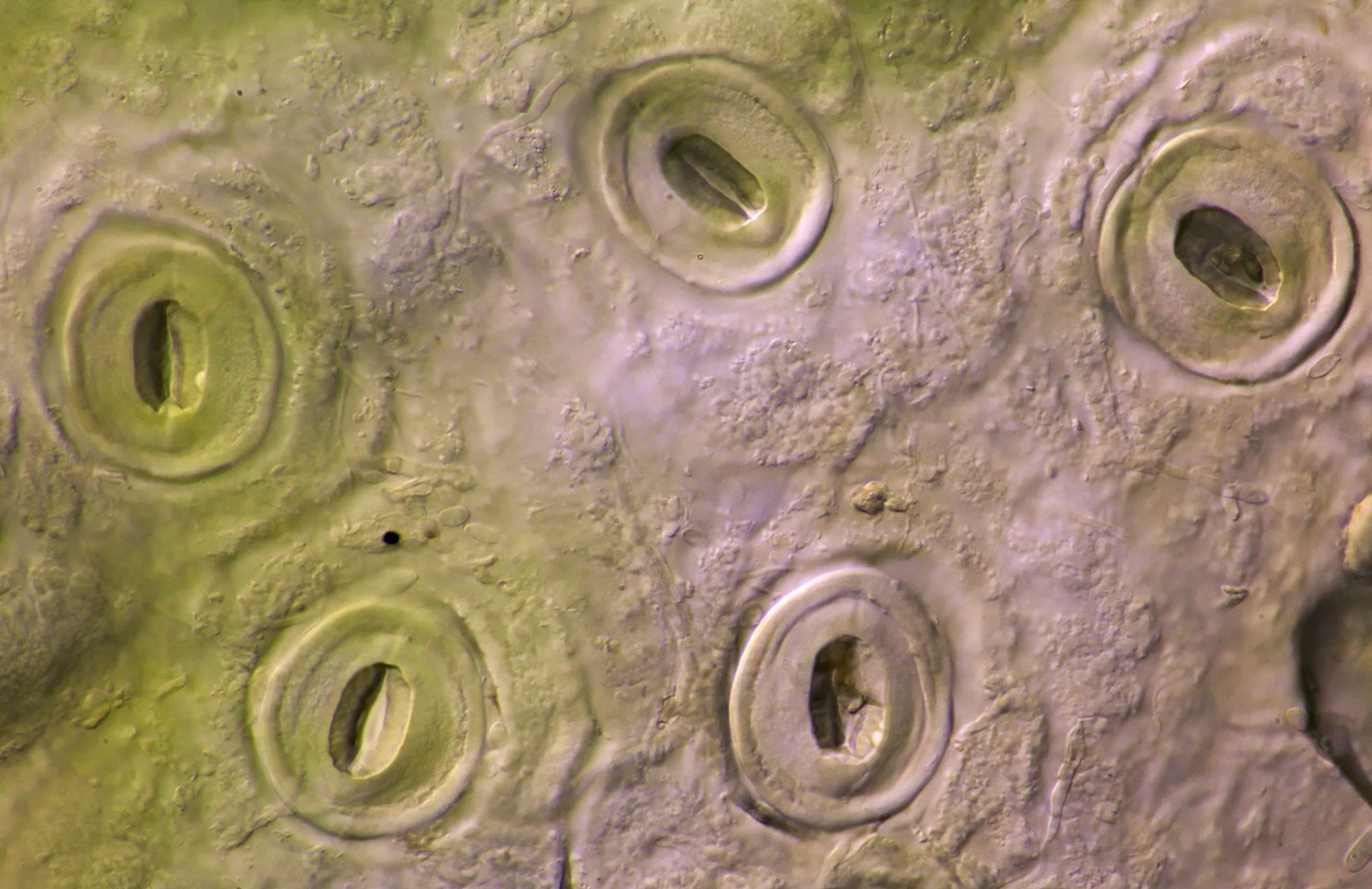 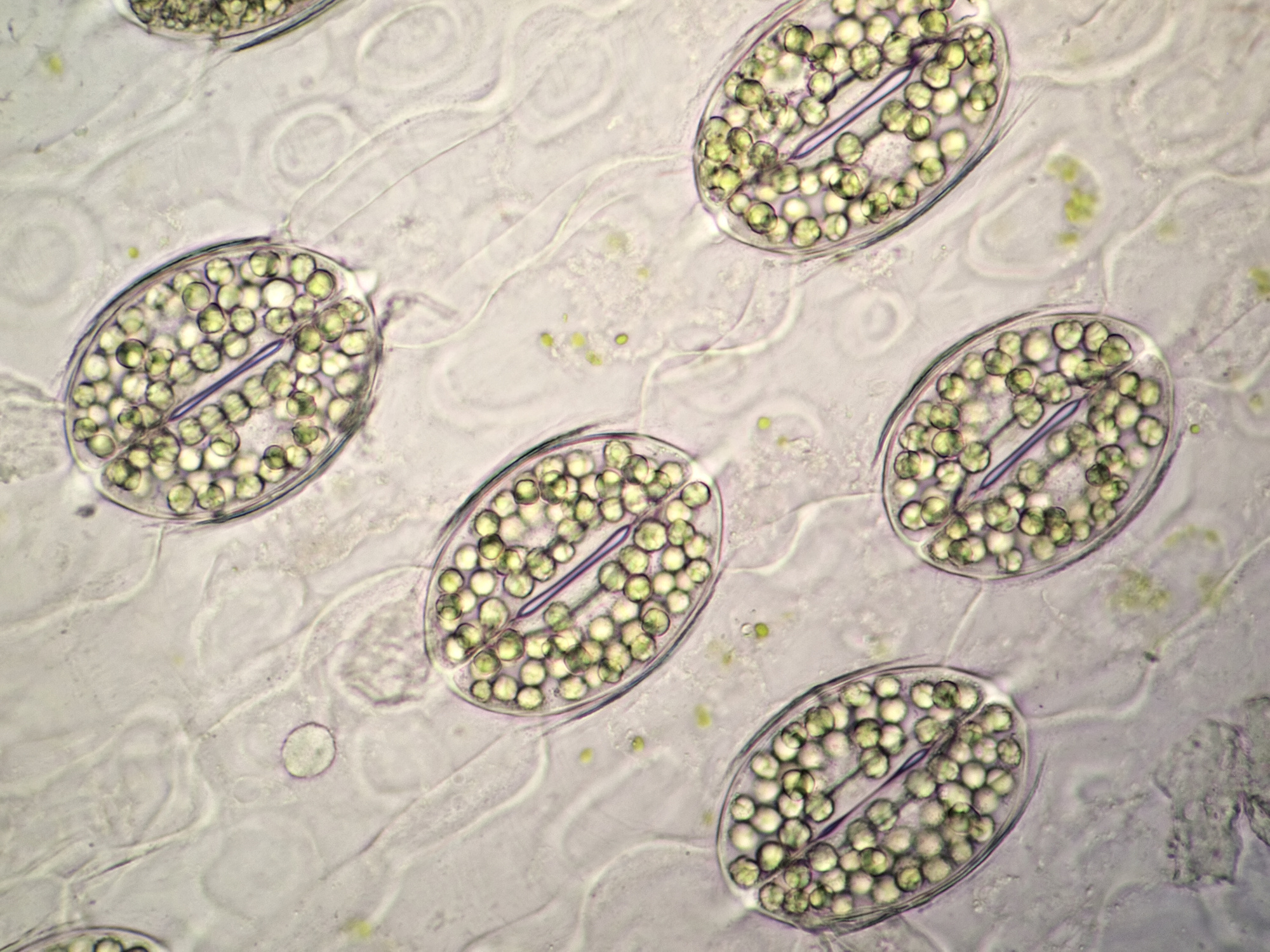