The right combination of objective and eyepiece

Having the right match of objective and eyepiece is more important for photography than for visual observation. During photography, optical aberrations become noticeable. The tests in this section are mainly aimed at the use of eyepieces for photography.

To determine if a certain objective-eyepiece combination is a good match, the image quality can be judged with a diatom slide or an object micrometer. But also a stained or fresh plant slide can be used. With low power objectives like 2.5x - 10x, I find white sand to be a very useful material to detect chromatic aberrations.

For the tests I used an Olympus PEN E-PL1 camera with a Sigma 30 mm lens or an Olympus 17 mm Pancake lens as relay optics between eyepiece and sensor. With the Pancake lens it is possible to photograph the entire microscope field and to detect optical aberrations up to the edge of the field of view.

A good example of an optical mismatch between objective and eyepiece from the same manufacturer is the Carl Zeiss 3.2/0.07 objective. Carl Zeiss Oberkochen only made compensating eyepieces (see above) and those eyepieces work fine with all Zeiss objectives produced in Oberkochen (including the 10/0.22 achromats) except for the 3.2/0.07 achromat. German microscopists sometimes call the 3.2/0.07 objective "Flashenboden", which refers to the bottom of a glass bottle. This indicates quite clearly that the image is not great when used with any of the compensating eyepieces from Carl Zeiss. But when this lens is combined with an eyepiece that has less or no compensation at all, the image is greatly improved, as the following images show. 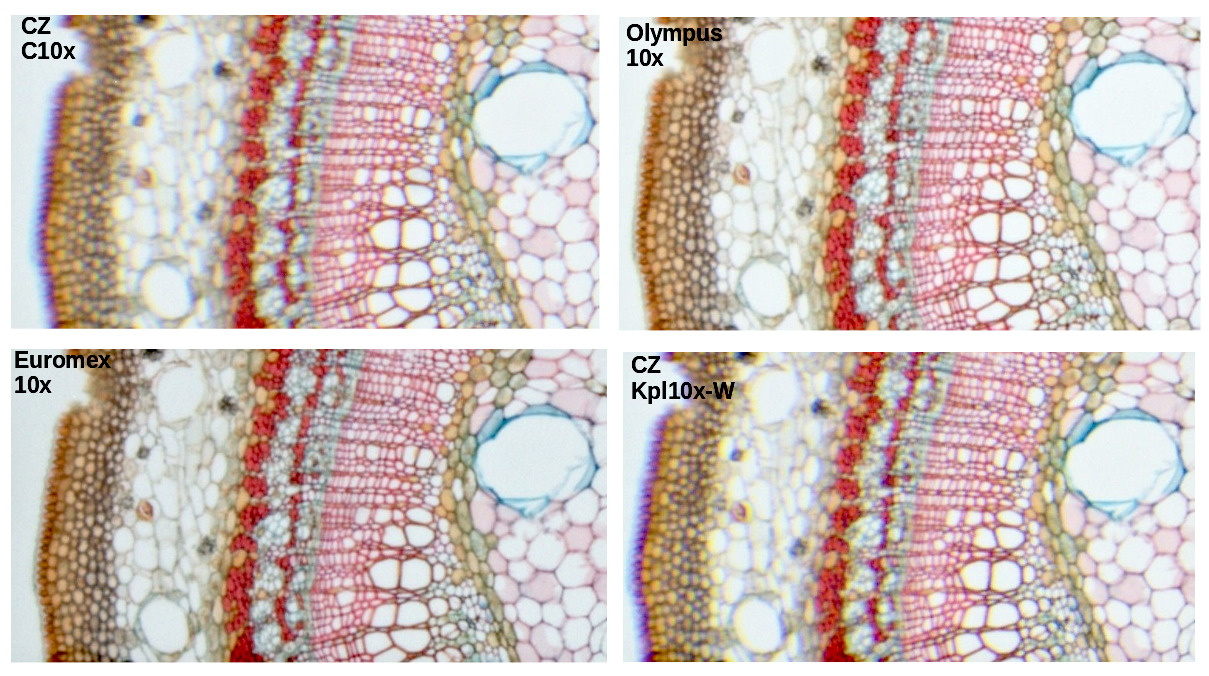 Section of a stained Tilia stem photographed with a Carl Zeiss 3.2/0.07 objective and with Olympus, Euromex and Carl Zeiss (CZ) eyepieces. With the CZ eyepieces, strong chromatic aberration is visible towards the edge. Another example where eyepieces from a different manufacturer can give better results are the objectives from Zeiss-Winkel. The Zeiss-Winkel 10/0.25 achromat hardly needs any compensation. This lens works best with a less or non-compensating eyepiece, for example a no-name Huygens eyepiece.

Epidermis from a leaf of Yucca filamentosa photographed with a Zeiss-Winkel 10/0.25 objective. A: Euromex 10x eyepiece. B: Zeiss-Winkel 8x eyepiece. In the lower picture, clear spherical aberration can be seen towards the edges; a substantial part of the specimen is not in sharp focus. 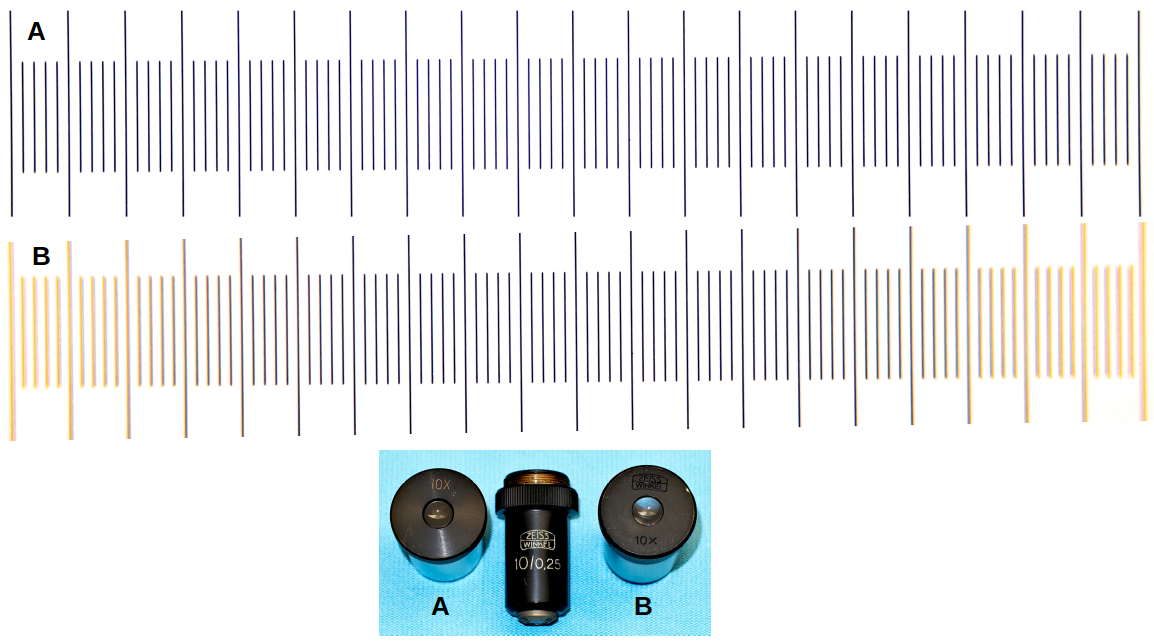 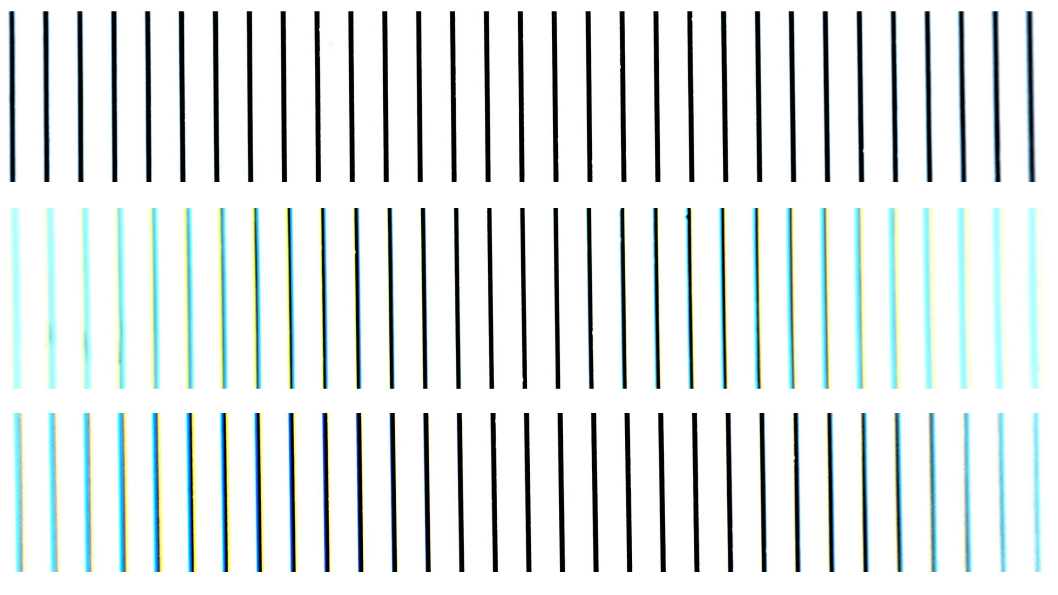 Stage micrometer photographed with a Zeiss-Winkel 40/0.65. The eyepieces used were, from top to bottom: Olympus P10x, Zeiss-Winkel 10x and Zeiss-Winkel K8x. Chromatic aberration is clearly visible at the edges when using Zeiss-Winkel eyepieces and a better image is obtained with compensating Olympus eyepieces.

Also the older Zeiss-Winkel achromats of 39 mm parfocal length work very nicely with eyepieces from other manufacturers. Both the 42/0.65 and 42/0.85 objectives give minimal artefacts in combination with a Olympus P10x eyepiece while the 10/0.25 achromat works perfectly with a Euromex 10x Huygens eyepiece. 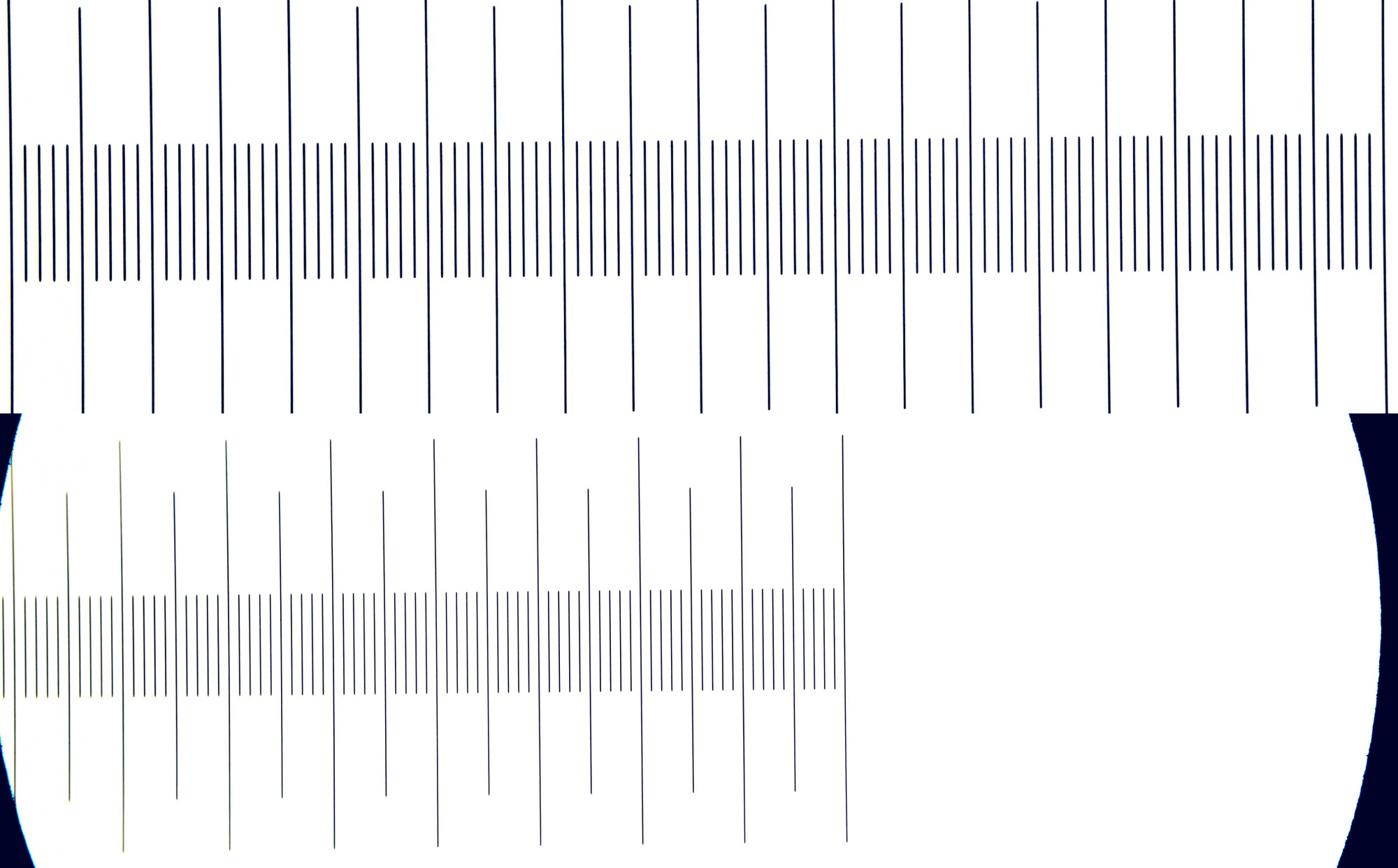 Stage micrometer photographed with Zeiss-Winkel 10/0.25, 39 mm parfocal lenght. The eyepiece used was a Euromex 10x Huygens eyepiece. No significant chromatic aberration is visible. In the lower picture, the objectmicrometer is in sharp focus from the middle to the edge of the field of view.

The following eyepieces from Carl Zeiss Oberkochen were tested: C10x, CPL W 10x, KF 10x and Kpl 10x W. The C eyepieces have the least correction and the Kpl eyepieces compensate the most. It is best to use Kpl eyepieces for all planachromats, (plan) neofluars and (plan) apochromats. Most disappointing in my opinion are the CPL eyepieces. These eyepieces show a clear pincushion distortion. No wonder that CPL eyepieces were sometimes called ‘Cheap Plastic Lenses’.......

Stage micrometer photographed with a Carl Zeiss Plan 25/0.45 and CPL W 10x eyepiece. The bars of the micrometer are curved at the edges indicating pincushion distortion.

Stage micrometer photographed with a Zeiss F40/0.65 objective. Left Cpl W10x eyepiece, right Leitz Periplan GF10x eyepiece (older version). With this objective, the pincushion distortion with the Cpl eyepiece becomes even more noticeable while an eyepiece from another brand gives a much better image.

The Arachnoidiscus specimen in the middle (A) is shifted to the edge (B), thereby becoming oval shaped. In the left image, the distortion is also visible in the other specimens lying at the edge. Carl Zeiss Plan 25/0.45 and CPL W 10x.

Crops from the previous image. A: Arachnoidiscus located in the middle. B: the same specimen, but now shifted to the edge. In addition to oval distortion, chromatic aberration is visible.

I have experience with many eyepieces from different brands but I have rarely seen eyepieces that distort the image as much as the Cpl eyepieces.

In the following images, an object micrometer is photographed with the other eyepieces. Even with the simple C10x eyepiece, the image quality is better than with the CPL W 10x.

Crops from the previous images showing the object micrometer at the far left of the field of view. Only with the Kpl 10x W eyepiece, no aberrations are seen over the entire field of view.

Olympus microscopes with 37 mm objectives were equipped with different types of eyepieces. Horseshoe stands were often supplied with 2 or 3 eyepieces such as a 5x, 10x and a P10x eyepiece. In addition to these standard magnifications, there were 7x, P7x, 15x and P15x eyepieces. Binocular microscopes were fitted with wide-angle WF10x eyepieces. The P and WF eyepieces have the highest degree of correction and are suitable for the better corrected objectives, planachromats and achromats with higher magnifications. For lower power achromats there are the regular Huygens eyepieces 5x, 7x and 10x. When there is a ‘P’ written on the eyepiece it means that it is a photo eyepiece which is well corrected.

Stage micrometer photographed with an Olympus 10/0.25 objective. A: Olympus 10x eyepiece. B: Olympus P10x eyepiece; chromatic aberration caused by over-correction can be seen at the edges. 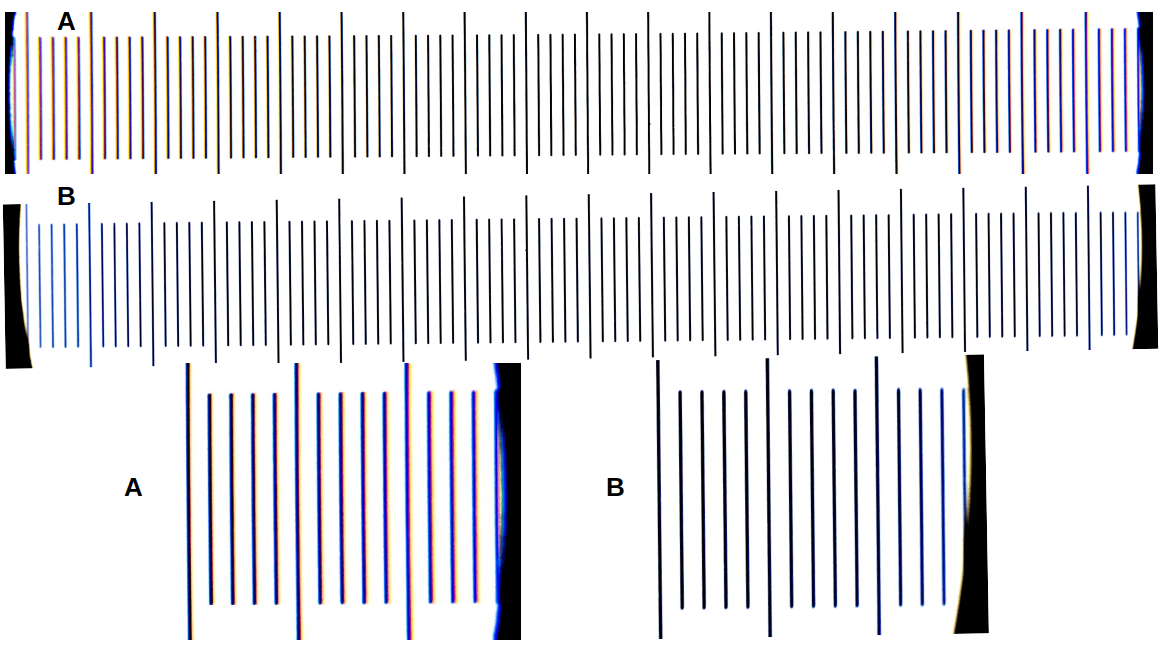 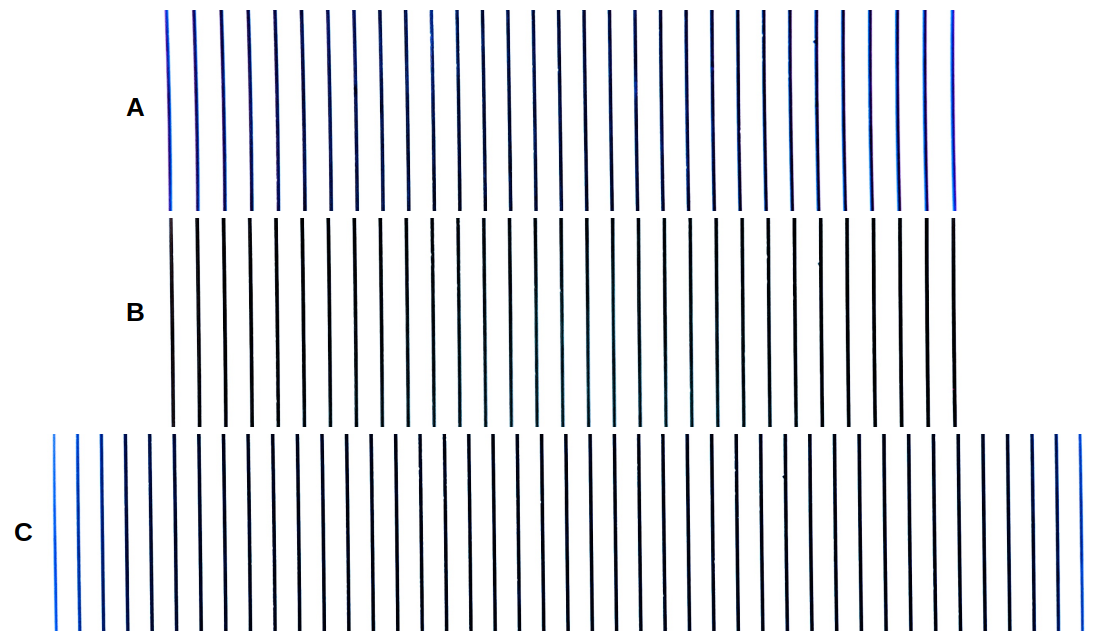 Stage micrometer photographed with an Olympus plan 40/0.65 and three different Olympus eyepieces. Chromatic aberration and slight pincushion distortion is visible at the edges with an Olympus 10x eyepiece (A). Better correction is achieved with an Olympus P10x (B) and Olympus WF10x (C) eyepiece. P10 and WF10x eyepieces have a comparable correction, but the field of view is considerably larger with the WF10x.

And then a mix of different manufacturers: the Olympus plan 40/0.65 with a no-name eyepiece on which is written: ‘8xP’. A perfect match, it turns out.

The Olympus plan 40/0.65 with a no-name 8xP eyepiece shows no significant aberrations.

There are quite a few companies that import cheap microscopes and optical parts from China. On the eyepieces and objectives of these microscopes there is never written a name of a manufacturer, at most the name of the importer. The simpler microscopes intended for educational purposes usually have normal achromats that are calculated for a mechanical tube length of 160 mm and are often equipped with wide-field (WF) eyepieces that do not or hardly compensate the residual errors from higher power objectives. Only from the 4/0.10 and 10/0.25 achromats, a reasonable image can be expected. With objectives 40/0.65 and of higher power, the image with such eyepieces is noticeably worse. Sometimes it is claimed that the higher power objectives on such microscopes are not convincing. This is often true when the unbranded eyepieces that come with it are used. As soon as compensating eyepieces are used, a strong improvement is seen. My experience is that higher power no-name objectives can provide good images when compensating eyepieces from Olympus (WF or P eyepieces) or Carl Zeiss (for example Kpl eyepieces) are used. The following tests were done with a no-name 40/0.65 achromat that was attached to a very basic high school microscope. The lens was also compared with a 160 mm achromat from a later period of Zeiss. 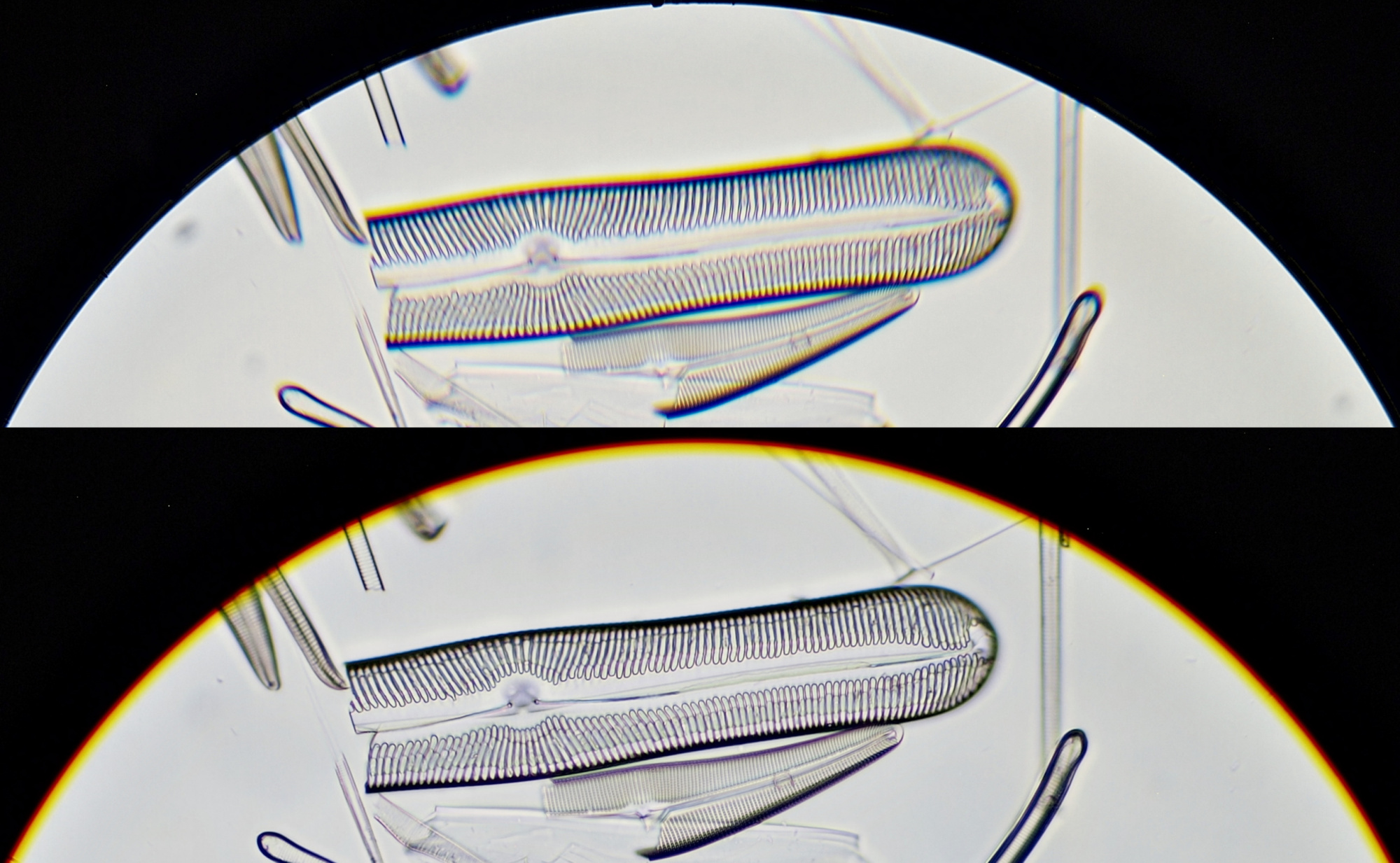 Diatoms near the edge of the field of view photographed with the no-name 40/0.65 objective. Upper image: the corresponding WF10x eyepiece was used. Lower image: a Carl Zeiss Kpl10xW eyepiece was used. In the upper image, a strong chromatic aberration and distortion are visible.

I have compared the no-name objective with various Zeiss achromats and I must conclude that this lens is just as good as the black Zeiss achromat from later times.

Tilia stem section. Left: no-name 40/0.65 achromat. Right: the black Zeiss 40/0.65 achromat. In both cases a Kpl10x eyepiece was used. There is hardly any difference visible, contrast and colour rendering are comparable.

Combinations of objectives and eyepieces from the same manufacturer do not always give the best results. Especially with plain achromats, it is recommended to experiment a bit. To get the best out of achromats, different eyepieces are required. Higher power achromats need compensation whereas low power achromats do not or need less correction. The proper objective-eyepiece combination is best determined experimentally and by critically assessing the microscopic image with suitable test slides.