With oblique illumination, both contrast and the visibility of fine details are enhanced. A pseudo 3-dimensional effect is created that gives depth to structures in the specimen thereby increasing visibility.

For the following tests I used a slide of Pleurosigma angulatum and a Zeiss-Winkel achromat 40/0.65. For a 40/0.65 objective, Pleursigma angulatum is a critical object; with insufficient resolution due to incorrect settings, the pore structure of this diatom will not visible. It is therefore a good test specimen to check the resolving power of a 40/0.65 objective. The experiments were performed with a Zeiss Standard GFL using the 0.9 NA flip-top Abbe condenser. The oblique illumination was created with different methods, each time another part of the microscope was shifted. When experimenting with oblique illumination it is important that the field diaphragm and aperture diaphragm are fully opened. Furthermore, the use of a phase-telescope or Bertrand lens is strongly recommended. These tools are used to monitor and record the illumination at the back lens of the objective so that optimal settings can be repeated later. The degree to which a certain part of the microscope is shifted and the height of the condenser have a drastic effect on the results. It is best to experiment with this as much as possible. Figure 1 shows some parts of the Standard GFL that were used to alter the illumination.

The following images of Pleurosigma angulatum were made using different settings. The effect of the settings (numbered 1 to 6) on the illumination at the back lens of the objective as seen through a phase-telescope is shown in figure 5.

Fig.2. Pleurosigma angulatum in normal bright field illumination (left, setting 1) and oblique illumination using a darkfield stop in the filter holder (right, setting 2). In the right image, the fine structure of this diatom is much more visible.

Fig.4. Oblique illumination by tilting the condenser top lens (left, setting 5) or by positioning the filter holder in the light path (right, setting 6). 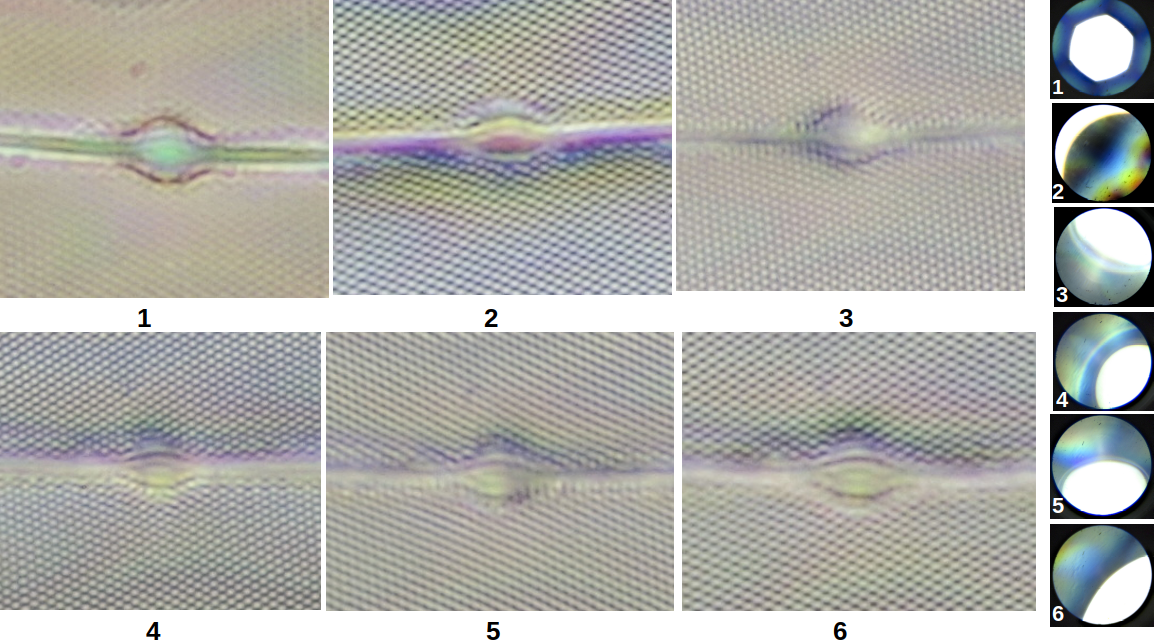 Fig. 5. Overview of the different settings. 1: Bright field illumination. 2: Darkfield stop. 3: Decentering the condenser. 4: Auxiliary lens shifted under condenser. 5: Tilted condenser top lens. 6: Filter holder positioned in light path. On the far right of the picture, the illumination at the back lens of the objective is seen, photographed using a phase telescope.

I personally find that in the experiment above the best contrast and resolving power was obtained by shifting the auxiliary lens (setting 4) or using a darkfield stop in the filter holder (setting 2). In my opinion, these two methods proved to be best in resolving the structure of Pleurosigma angulatum. On the other hand, decentering the condenser (setting 3) produced the least color artifacts and a nearly gradient-free oblique illumination was obtained.

In addition to improved contrast and resolving power, oblique illumination has a positive effect on the depth of field. At the same time, a pseudo-relief is created which can be clearly seen in the following image. 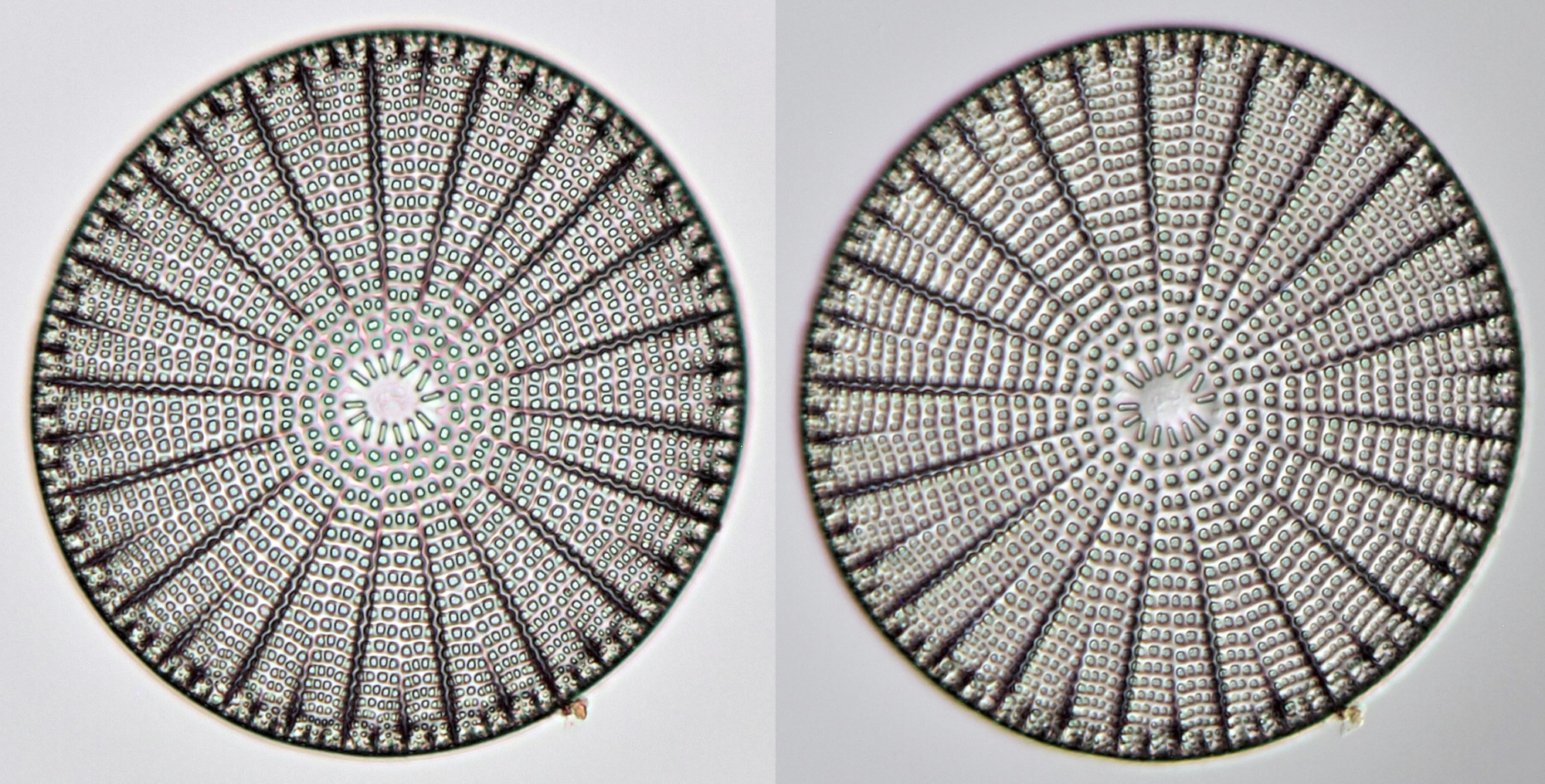 I achieved the most satisfactory results by placing a lens on the light exit of the Zeiss Standard GFL. The lens I used for this came from a Carl Zeiss Jena (1.2 N.A.) Abbe condenser. I unscrewed the top lens and placed the bottom lens (the field lens) asymmetrically on the light exit. The condenser of the Zeiss Standard GFL is turned all the way up and the aperture diaphragm is fully opened. The field aperture of the light exit is also opened to the maximum. The field lens is then placed on the light exit and shifted until a satisfactory result is achieved. I set the position of the field lens in such a way that there is no strong illumination gradient in the image, while at the same time enough depth of field has to be created for the objects to appear with plasticity. With a little experimentation, results can look a lot like Differential Interference Contrast (DIC). 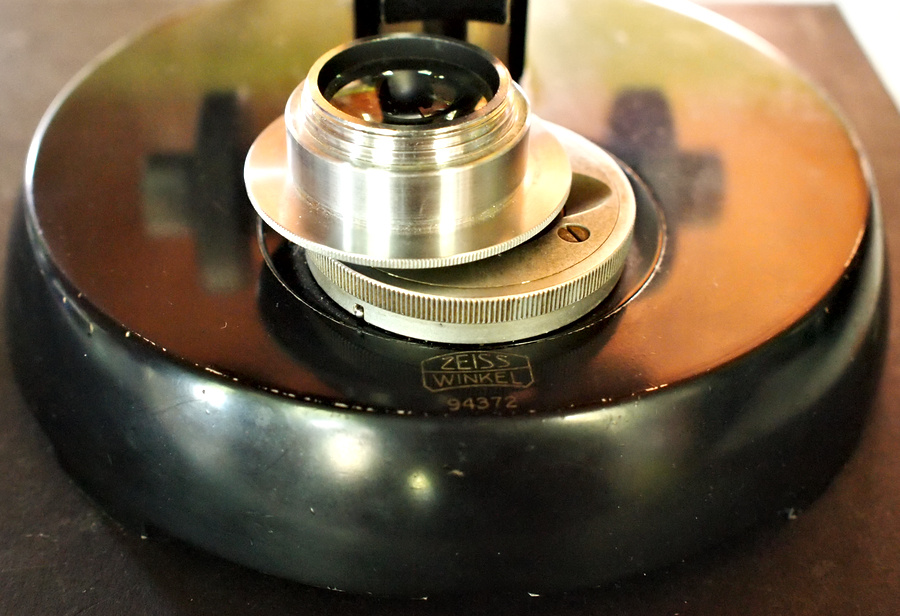 1: The brightfield position of fasecontrast condensor 402a was decentered.

2: A diffuser was placed on the lamp-opening and a diaphragm was, slightly decentered, placed on top of it.

3: As in method 2, but now the diaphragm was raised by putting it on a plastic tube.

5: Decentering the darkfield stop of fasecontrast condensor 402a. 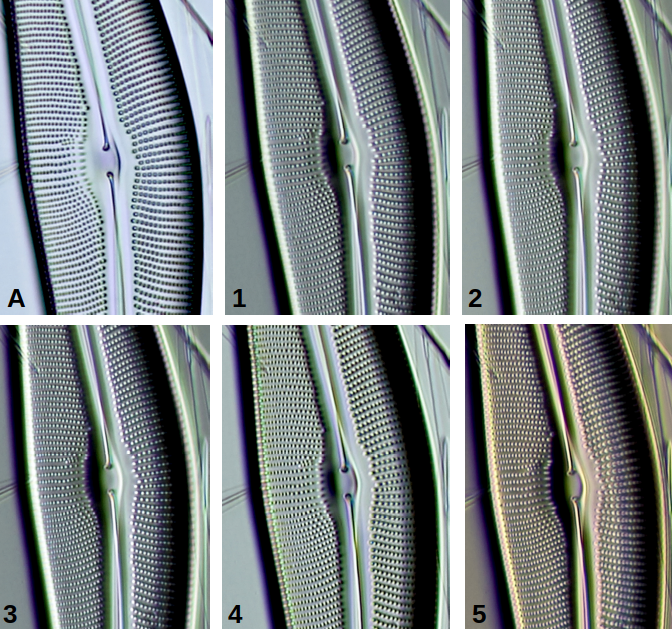