The moment when the cyanobacteria (Cyanobacteria), also called blue-green algae, appeared on Earth has undoubtedly been the most important evolutionary event. We go back about 3.5 billion in time. Before that time, the Earth was an anoxic planet and the only life form present were bacteria that could thrive without oxygen, the so-called anaerobic bacteria. From the moment the cyanobacteria appeared on the scene, oxygen was produced by means of photosynthesis. Cyanobacteria possess the photosynthetic pigment chlorophyll. The presence of oxygen has accelerated evolution, allowing the emergence of more complex multicellular organisms. Without oxygen, life on Earth would probably still have been unicellular in the form of bacteria.

The fact that cyanobacteria are also called blue-green algae is misleading. They have nothing to do with algae. Cyanobacteria are prokaryotic organisms like all other bacteria, i.e. they do not have a cell nucleus and cell organelles. All algae are eukaryotic.

An important and interesting theoretical concept in evolutionary biology is the uptake of cyanobacteria by the first eukaryotic cells making them the precursors of chloroplasts. It is plausible that chloroplasts and also mitochondria arose because cyanobacteria and other bacteria, respectively, were taken up by endosymbiosis in the first primitive eukaryotic cells. This theory is called the endosymbiont theory and is widely accepted today.

Cyanobacteria are found all over the world in all watery environments and they produce a significant part of the oxygen in our atmosphere. Some species cause algal blooms in the summer, which can cause massive fish deaths due to the excretion of toxic substances.

In the next sections, some images are shown of cyanobacteria that I have encountered and photographed over time.

Nostoc is a colony-forming cyanobacterium consisting of chains of linked cells with a diameter of 3-7 μm. The cells are embedded in a jelly-like matrix and macroscopically Nostoc is visible as slimy, brown to olive-colored material.

A slimy brown layer found in a puddle in Amersfoort turned out to be a colony of Nostoc (left). Right: Nostoc chains photographed with Carl Zeiss Plan 25/0.45.

Nostoc, photographed with oblique lighting and Carl Zeiss Apo 40/1.0 (left) and Lomo Apo 70/1.23 (right). In the background, many normal bacteria are visible as small rods.

Anabaena is a filamentous cyanobacterium that can fix nitrogen from the air and is known for producing toxins. The cells are cylindrical or round and arranged in chains that are 3-12 μm in diameter. Some cells in the chains are clearly larger and these are specialized cells. We distinguish here the so-called heterocysts and akinetes. Heterocysts are cells that can bind nitrogen from the air and thus provide nitrogen fixation. In the akinetes, reserve substances are stored and these cells survive when environmental conditions become unfavorable.

At my work there is a large pond that sometimes turns completely green in the summer and I once took a sample from this. The density of cyanobacteria was very high and it turned out to be Anabaena spiroides. There were so many cyanobacteria present that the sample taken looked more like green paint.

Algal bloom caused by Anabaena spiroides in the pond at my work. On the right you can see how viscous the sample was. 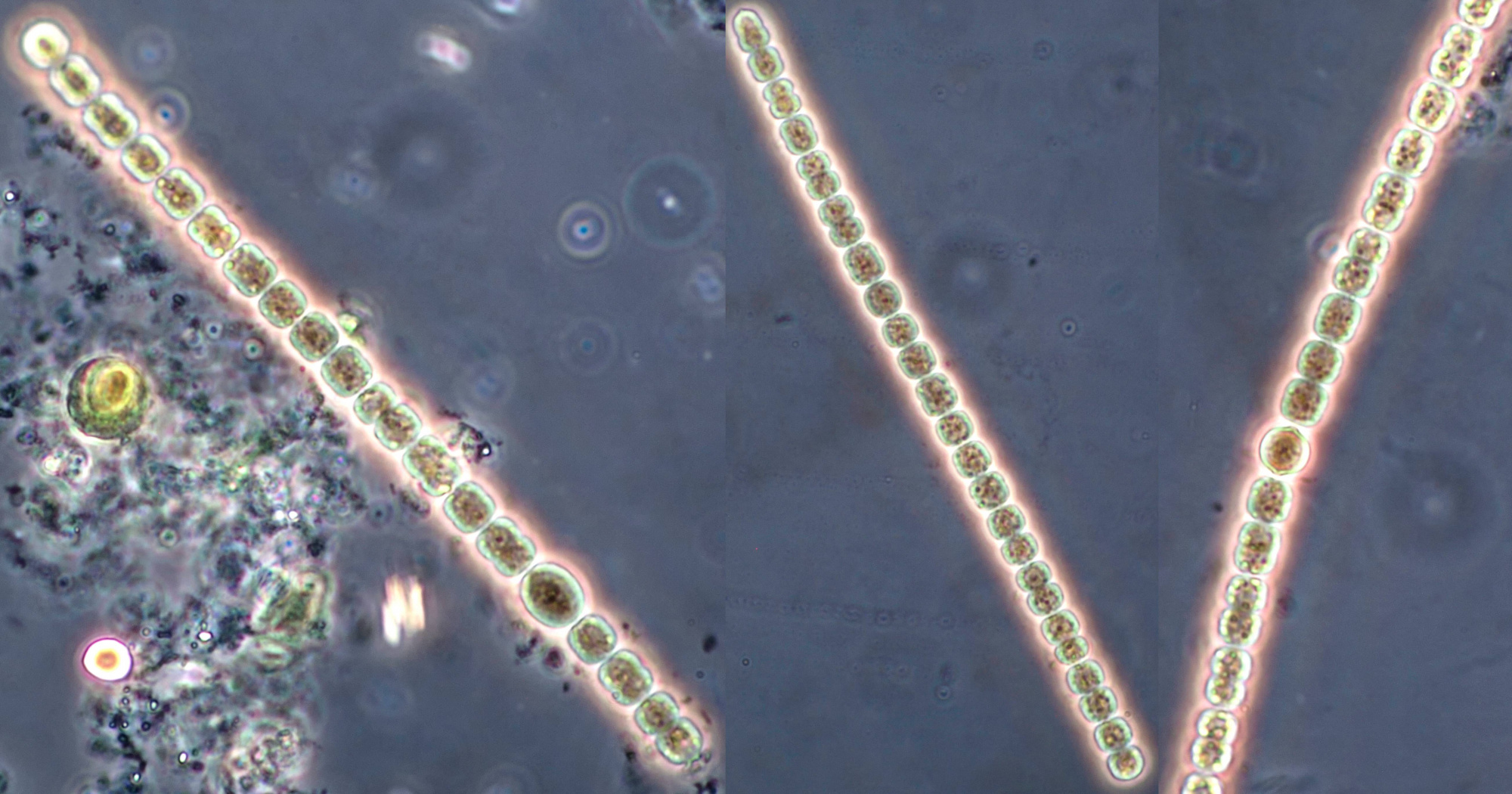 During the summer season, there are sometimes warnings about blue-green algae on the hottest days. This mainly concerns the cyanobacterium Microcystis, which produces various toxins that can be harmful to humans and animals. The best known toxin produced by this cyanobacterium is mycrocystin, which can cause liver damage. Algal blooms due to Microcystis mainly occur in still or slow flowing waters. Microcystis forms colonies of many small round cells with a diameter of 1-9 µm. Left: algal bloom by Microcystis in the river Maas near Kessel (Limburg). I took a sample of this and photographed it with objective Zeiss-Winkel 40/0.65 (right).

The colonies of Microcystis aeruginosa can form typical patterns that are clearly visible at low magnifications. Left: objective 10/0.25. Center and right: objective 20/0.40. 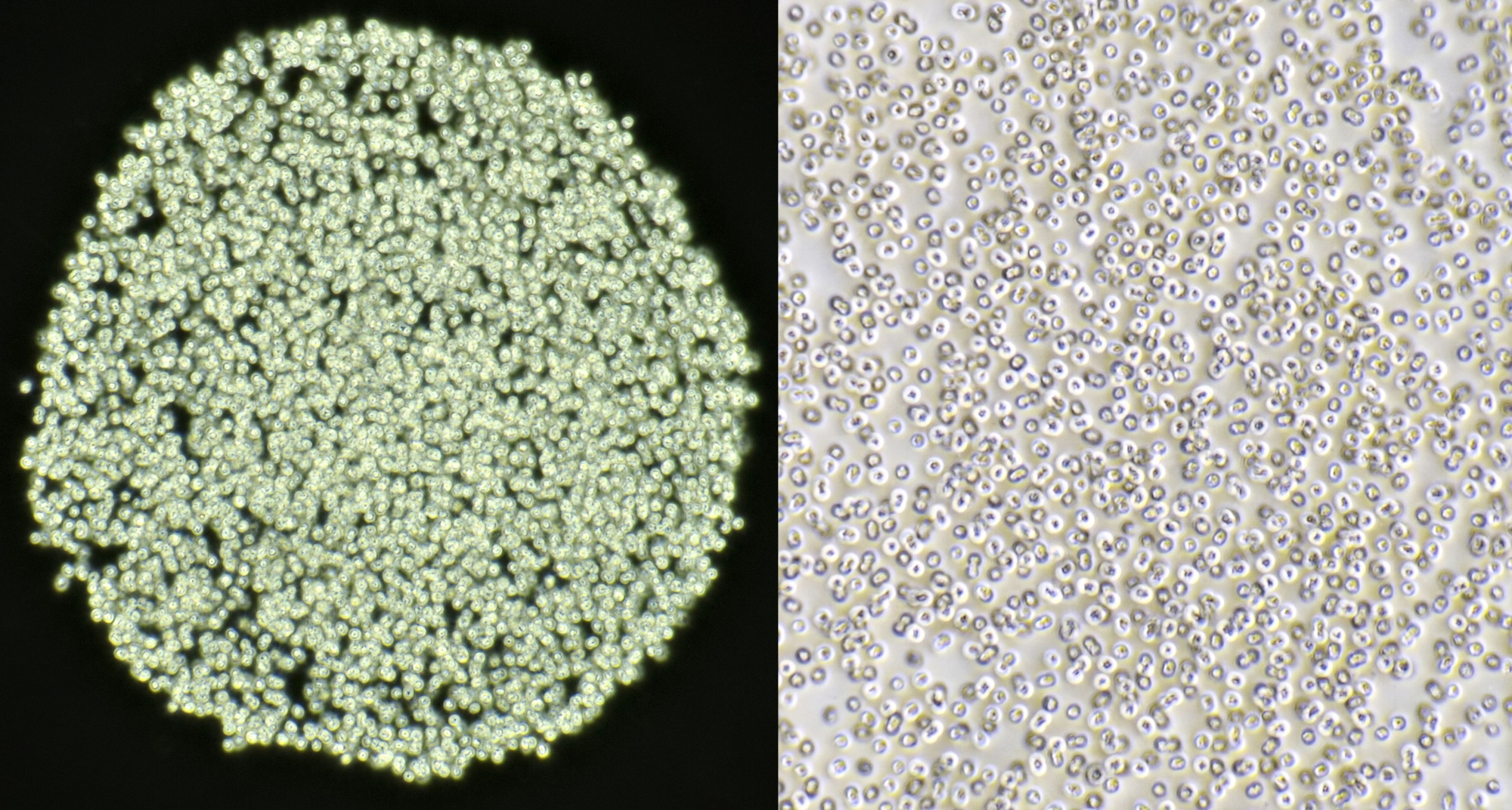 Observing Oscillatoria is fascinating. These filamentous cyanobacteria move slowly in a crawling motion. The mechanism behind this motion is still not fully elucidated. Oscillatoria consists of long filaments of small cylindrical cells. The width of the filaments varies from 1-35 µm.

Aphanizomenon is a filamentous cyanobacterium that, like Oscillatoria, is motile. The diameter of the filaments varies between 2-8 μm. This cyanobacterium can also cause toxic algal blooms.