For most people, the beginning of spring is a joy, for people with hay fever, however, the blossom can be a real misery because of the pollen. Pollen grains can more or less be regarded as the spores of seed plants. The seed plants are divided into two groups: the angiosperms or Angiospermae and the gymnosperms or Gymnospermae. All flower plants belong to angiosperms while flowerless seed plants such as the conifers belong to the gymnosperms.

In flower plants, pollen grains are formed in the anthers of the stamens while in gymnosperms they are produced in a structure called microsporophyll. Pollen can be spread by wind, insects, birds or bats. Pollen grains consist of 1 or more vegetative cells and a male gamete. In flower plants, the pollen grain germinates on the pistil of the flower and from the vegetative cell a pollen tube is formed that makes its way to the ovary. Here the male gamete eventually fuses with an egg cell.

Each plant has its distinctive pollen; the shape, size and structures on the surface of the grains are usually specific to each plant species. The science that deals with the study of pollen is called palynology. A lot of information can be extracted from pollen. This is used in archaeological and palaeoclimatic research, among other things. In paleoclimatology, the fossil pollen extracted from deeper layers of the earth is studied with a microscope, which gives insight in the type of vegetation that was growing a long time ago. With this information, one can deduce the temperature of the past. Furthermore, pollen research is essential for predicting hay fever seasons and information can be gained regarding plant relationships. Also, beekeepers often want to know which plants their bees have visited.

Pollen grains from plants that depend on insects for pollination are often surrounded by an oily substance that makes them stick to the insect more easily. Also spikes on the surface of the grains help to cling to the insect. Such spikes are clearly visible in pollen grains of for example Alcea rosea and sunflower. The pollen of conifers or Coniferae, to which all pines belong, is being spread by the wind. Because this is a less targeted distribution, these plants produce lots of pollen. The pollen grains of pine trees also have special air pockets that enhance transport by the wind. Pollen grains are surrounded by a very thick and sturdy wall which offers protection against harsh weather conditions. This wall is made up of several layers: the innermost layer is constisting of intine which in turn is surrounded by a layer of exine. On the very outside, the pollenkitt is located, and this is the aforementioned oily substance. Pollenkitt is mainly produced in pollen that is spread by insects. The pollen wall contains sites where there is much less exine material. Such a thinner part is called an aperture and the wall is weaker there, making it easier for the pollen tube to leave the cell.

Most pollen occurs as single grains, so-called monads. In some plant species, however, the microspores stick together, creating multicellular grains. Grains consisting of 4 young cells occur in Rhododendron and are called tetrads.

In some plants, several pollen grains are held together as packages by so-called viscin threads. This way, more material will be spread. The threads are only observed in two plant families, the Ericaceae and Onagraceae.

There are several ways to observe pollen with a microscope. In the literature, the embedding of pollen in glycerine in combination with a dye such as basic fuchsine is often described. The dye is used to enhance the visibility of certain pollen structures. But even without this dye, the structures of pollen grains are very well visible in normal brightfield illumination or oblique lighting. I will describe here an easy and quick method to make a pollen slide in which the details of the pollen grains will be clearly visible without using a dye. The slide can be stored for a long time. I do not use glycerine for this, but something that can be found in every kitchen: an oil such as olive or sunflower oil. The more transparent and colorless the oil is, the better and I usually use sunflower oil. A small drop of sunflower oil is placed on a slide. It is important not to use too much oil. Then, with a toothpick, some pollen are scraped from an anther and being transfered to the drop of oil. Mix a little and put a cover slip on it. The oil will spread slowly under the cover glass. It will take some time for the oil to spread completely and the flow in the specimen to stop. A slide made this way can be stored for at least a year or more. In addition, the pollen grains remain intact. For example, when water is used instead of oil, some pollen grains will swell and eventually burst. When you observe dry pollen on a slide, everything looks rather dark because the light does not pass through the grains very well. In an oil, pollen grains become more clear and transparent and the structures can be better observed. 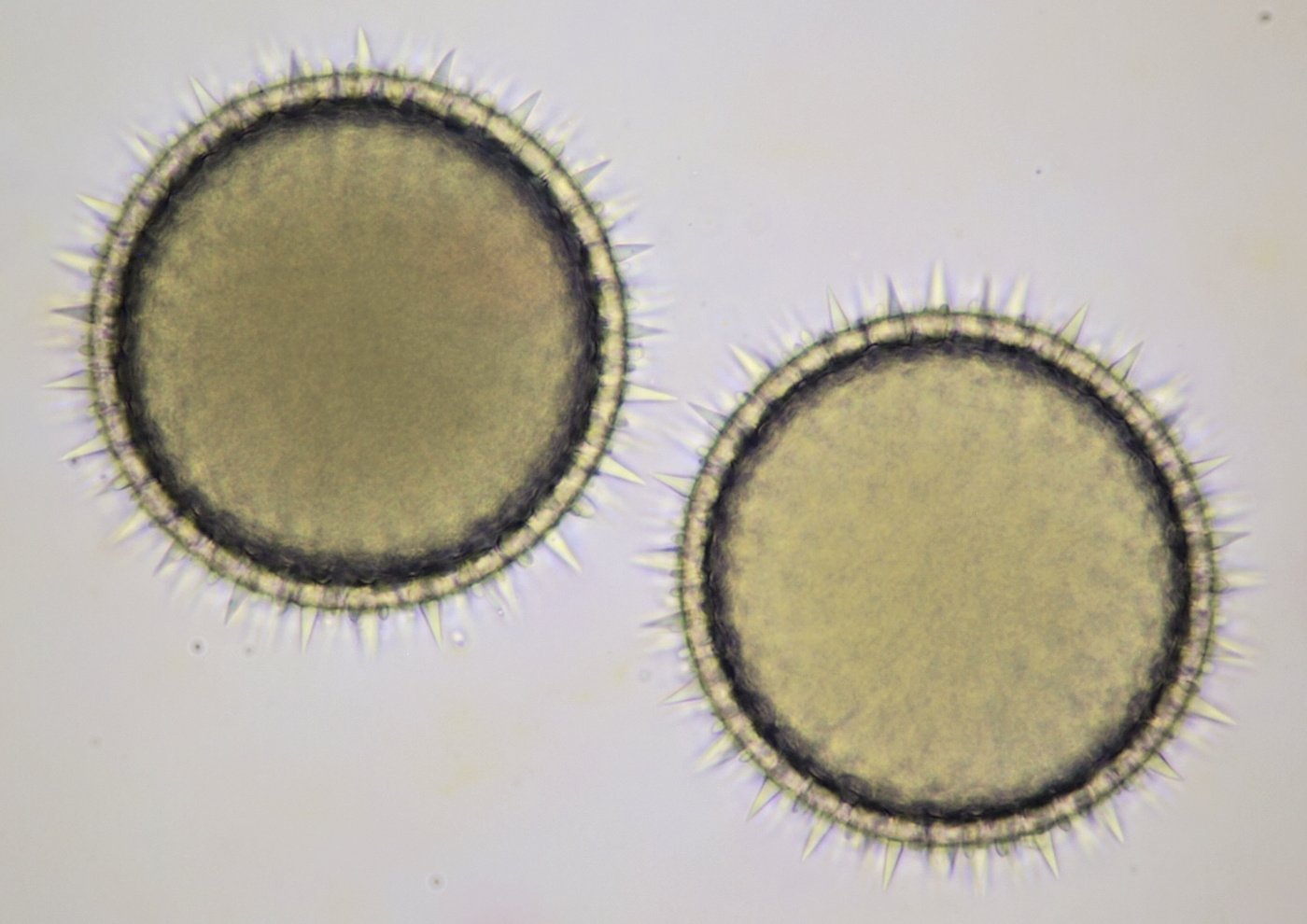 Pollen grain of Oenothera captured in different focal planes. Viscin threads are visible on the upper right of the grain. Objective: Zeiss-Winkel 40/0.65. 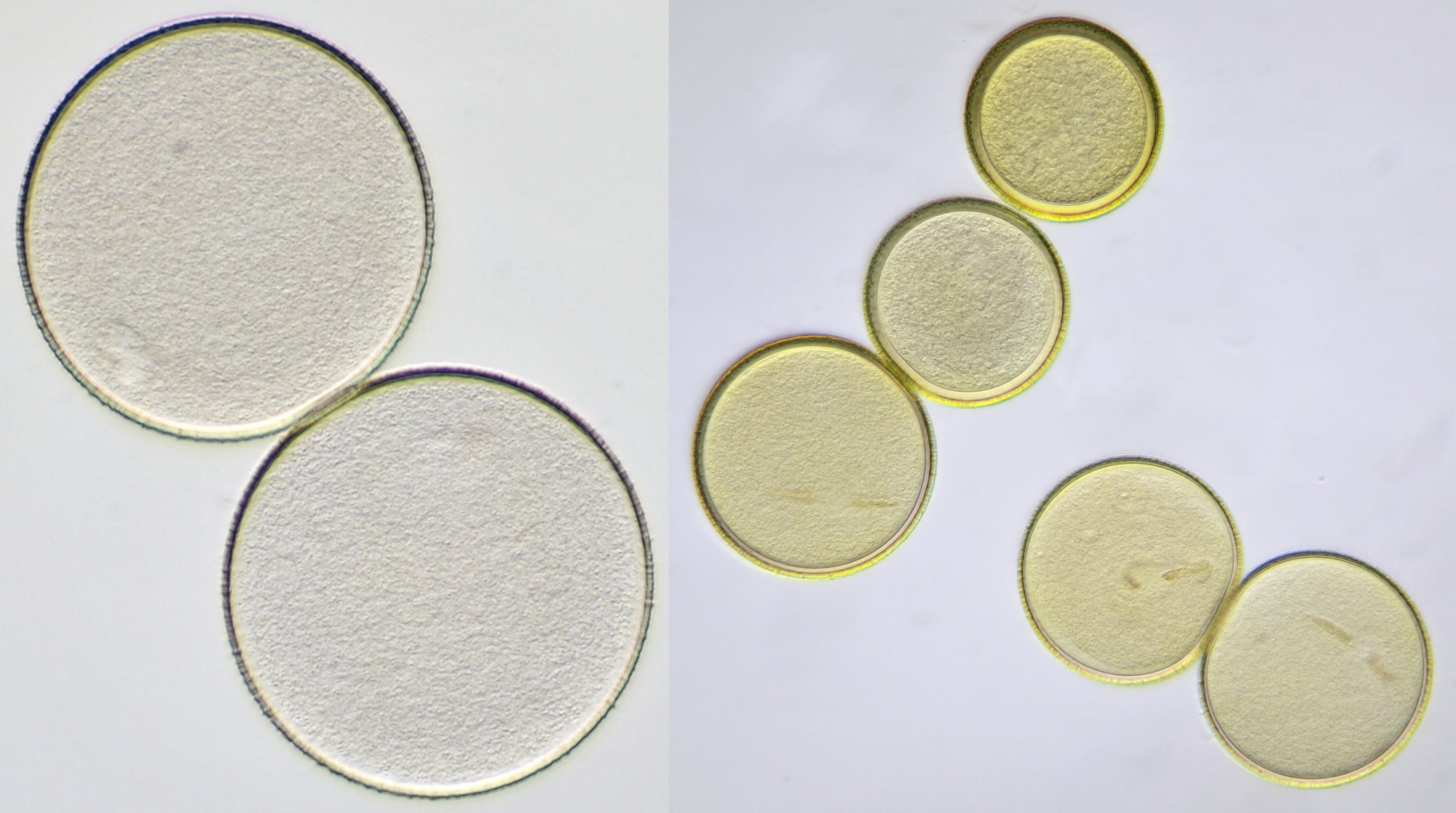 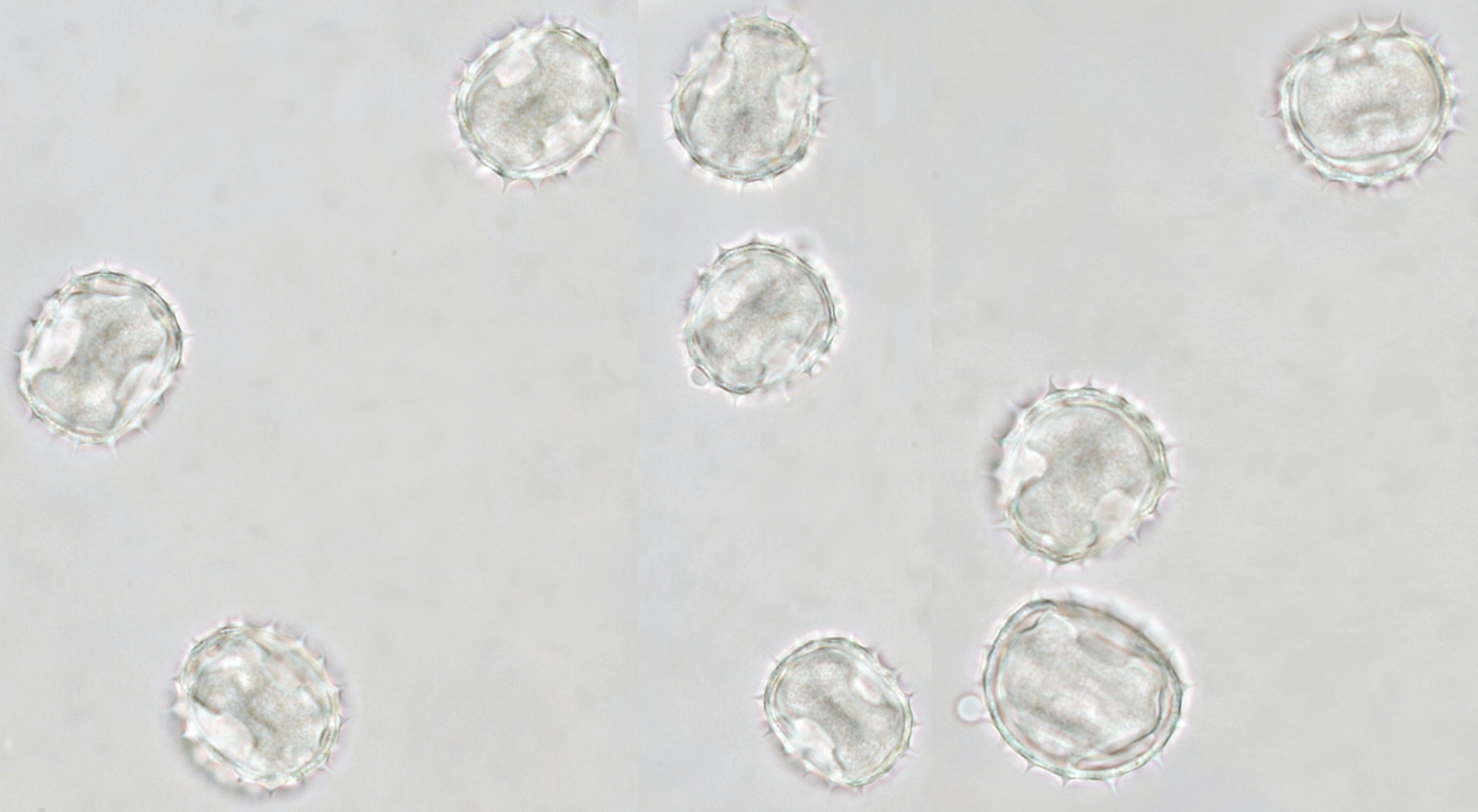 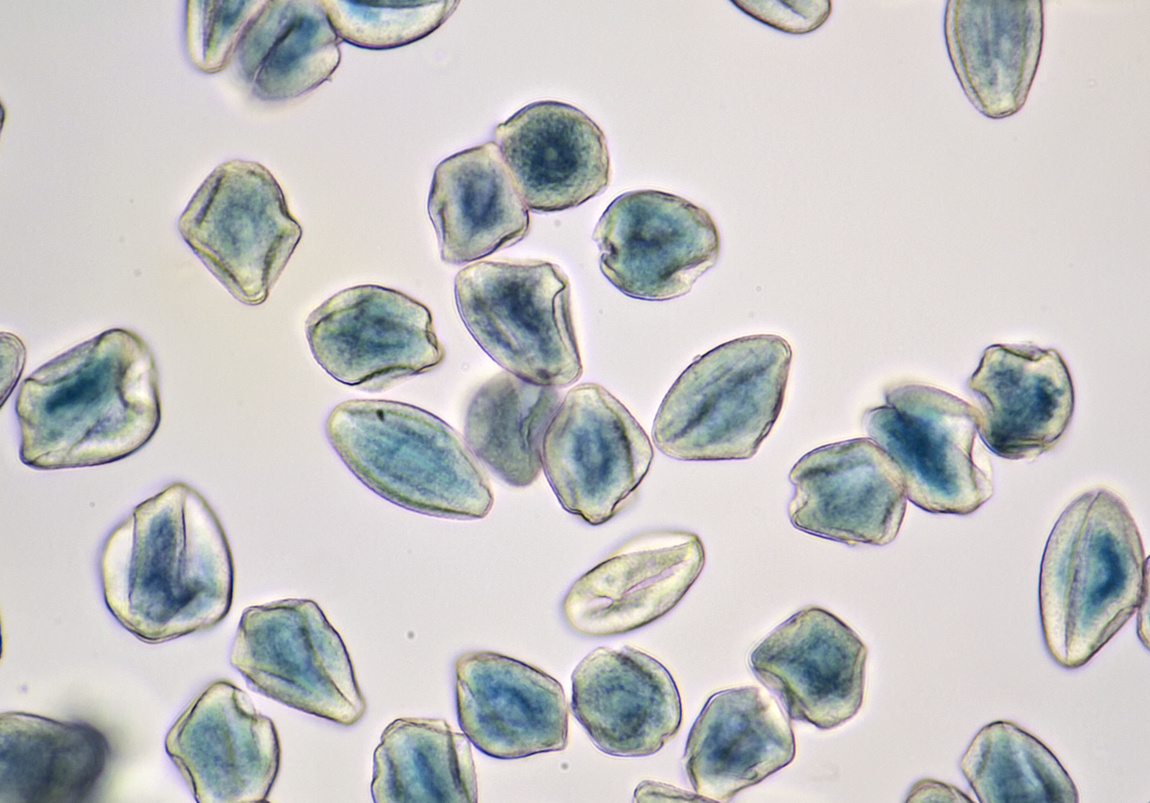 Pollen of Rhododendron. Here we see tetrads of 4 young pollen grains of which only 3 are visible due to spatial orientation. Furthermore, viscin threads are visible in the right image at the upper side of the grain below. Click on the picture to enlarge, the threads will become more visible. Objectives: Carl Zeiss Neofluar 25/0.60 (left image), and Carl Zeiss Neofluar 40/0.75 (right image).